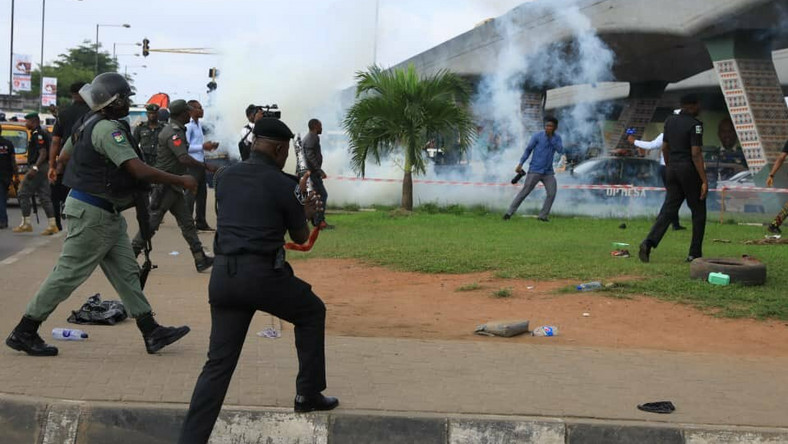 The RevolutionNow protest is a nationwide demonstration against the President Muhammadu Buhari-led government that was re-elected in February.

The Inspector-General of Police, Mohammed Adamu, had in a Sunday statement described the planned protest as a call that amounts to “treasonable felony and acts of terrorism”.

He warned the organisers, sponsors, allies, supporters, associates and sympathisers of the protest to desist from embarking on it.

A RevolutionNow protester challenges a police officer during a demonstration in Surulere, Lagos on Monday, August 5, 2019 [Sahara Reporters]

“The Police will work with other Law Enforcement Agencies and positive minded Nigerians to protect, defend and secure our public peace and space,” he said.

Despite his warning, protesters showed up for a demonstration at the National Stadium, Surulere, Lagos, on Monday, chanting revolution songs.

The protesters also demanded the release of Omoyele Sowore, the convener of the protest who was arrested by the Department of State Services (DSS) on Saturday, August 3.

The DSS and the Federal Government accused Sowore, a candidate in February’s presidential election, of plotting to forcefully overthrow the government.

Shortly after the commencement of the protest, officers started firing tear gas canisters to disperse the handful of defiant protesters.

Some of the protesters were injured in the chaos that ensued, while some were also arrested by police officers.

While speaking to the press after the dispersal, Tijani Fatai, an assistant commissioner of police, said the gathering was unlawful.

“Nobody has consulted or contacted the Police seeking permission to protest, peaceful or non-peaceful.

He said the Police has the capacity to sustain suppression of the planned protests.

I Don’t Represent Nigeria,I’m An Ambassador For Myself – Chimamanda Adichie